A longer time ago I had bought an Edirol PC-50 MIDI keyboard, to be able to connect to some synthesizer programs on my computer:

Now it would be interesting to be able to also connect it to my TTSH. For that I would need some MIDI-to-CV interface. At https://midisizer.com/midi2cv-mk2/ I found a nice little PCB design, called Midi2CV. It seemed to fit to the TTSH. I have ordered the PCB, and the needed components at Mouser. The Mouser components arrived first. As usual a lot of little plastic bags: 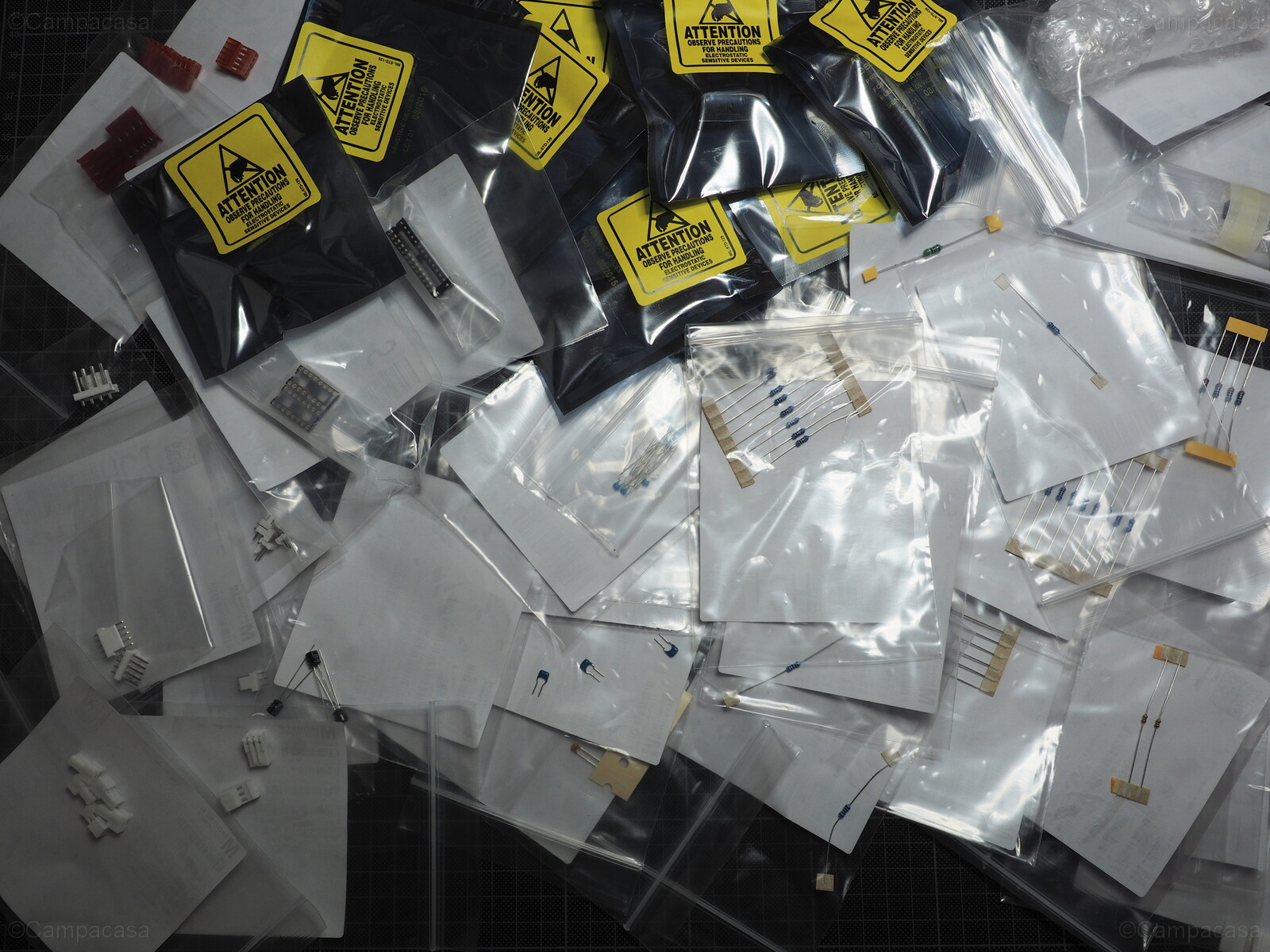 The delivery of the Midi2CV PCB and pre-programmed ATMega328p microcontroller took a little longer. It left the US quite fast, but customs in Germany took about two weeks. 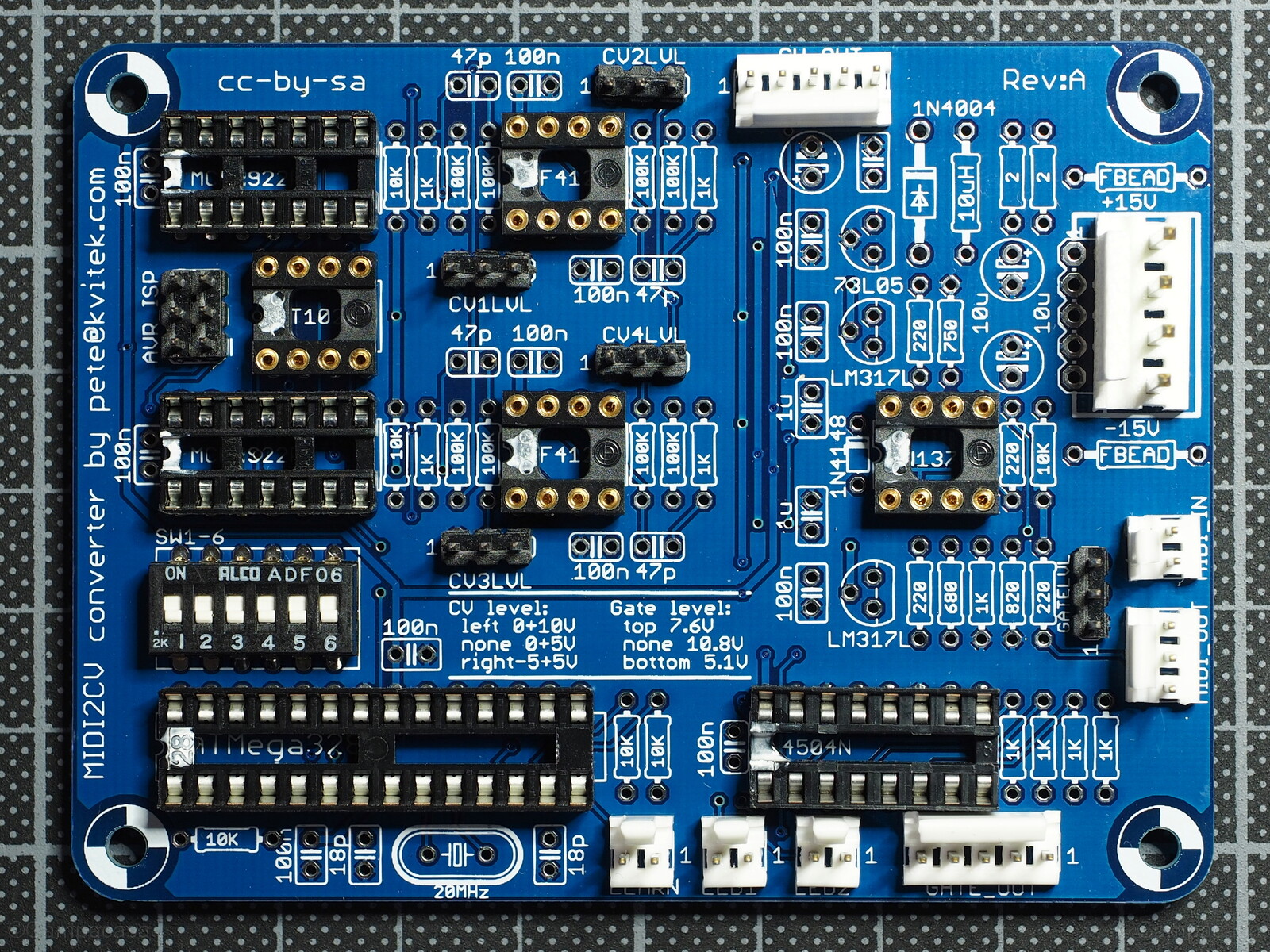 One component, the LT1021N precision reference, was not available at Mouser. I have ordered it, together with some other things, at Conrad. Then I could build up and test the Midi2CV: 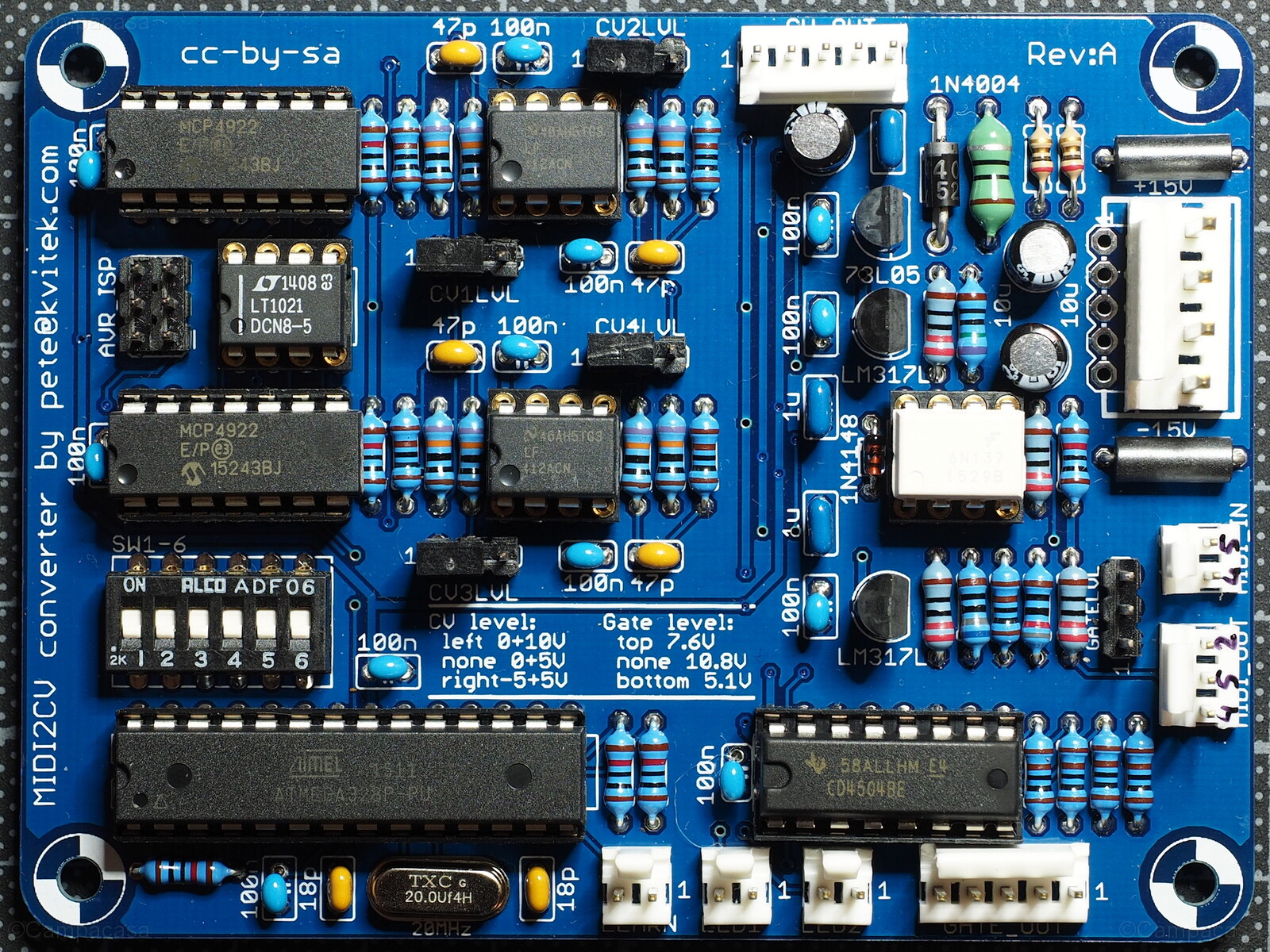 Temporary connection to the TTSH and PC-50 keyboard showed that the Midi2CV is correctly working.

There's just one thing I needed to reprogram on the Midi2CV: The strobe (or trigger) signal by default was inverted. Meaning, it triggered down from +10V. The TTSH requires a trigger signal going up from 0V. Changing was not difficult and possible by uploading an according Sysex file to the Midi2CV. The Midi2CV website provides this information. In order to do so from my computer, the PC-50 keyboard can be set into a mode where the MIDI signal received though USB gets passed on to the real MIDI output. This way it was possible to connect my computer to the Midi2CV. I used the Simple Sysexxer (note: page doesn't exist anymore) utility under Linux to upload the Sysex file.

Next I worked on a front panel for the Midi2CV, to be able to add it as extension module to the TTSH Case I'm building. That was easier said than done.

I'm using an aluminum L-shaped profile and designed the panel layout with QCAD. Jacks & Co. are mounted on perfboard. In QCAD I'm using a 2.54mm grid to align the panel holes to the perfboard. A temporary paper printout helped to locate the positions of the holes. 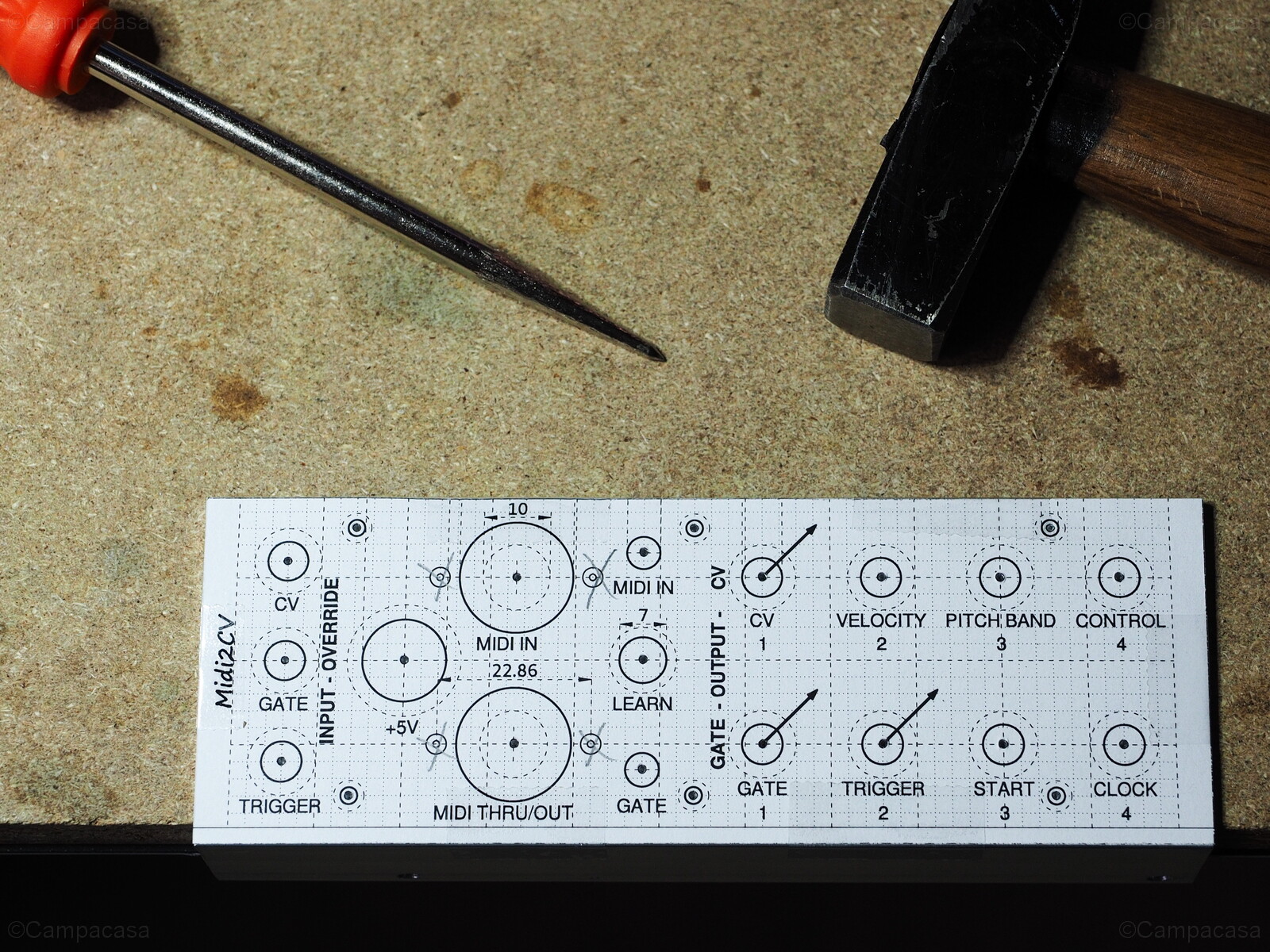 That didn't work out as good as I hoped. I'm missing some good tools to make big holes in a better way. But I have added an aluminum-like adhesive printout that hides at least part of the “damage”:

From left to right the panel offers:

I have set up to use the monophonic connections, where CV 1 to 4 represent note, velocity, pitch band and control. Gate 1 to 4 represent gate, strobe, start and clock. Note, gate and strobe (trigger) are internally connected to the TTSH through the input override jacks.

Then I could build the Midi2CV panel into the TTSH case: 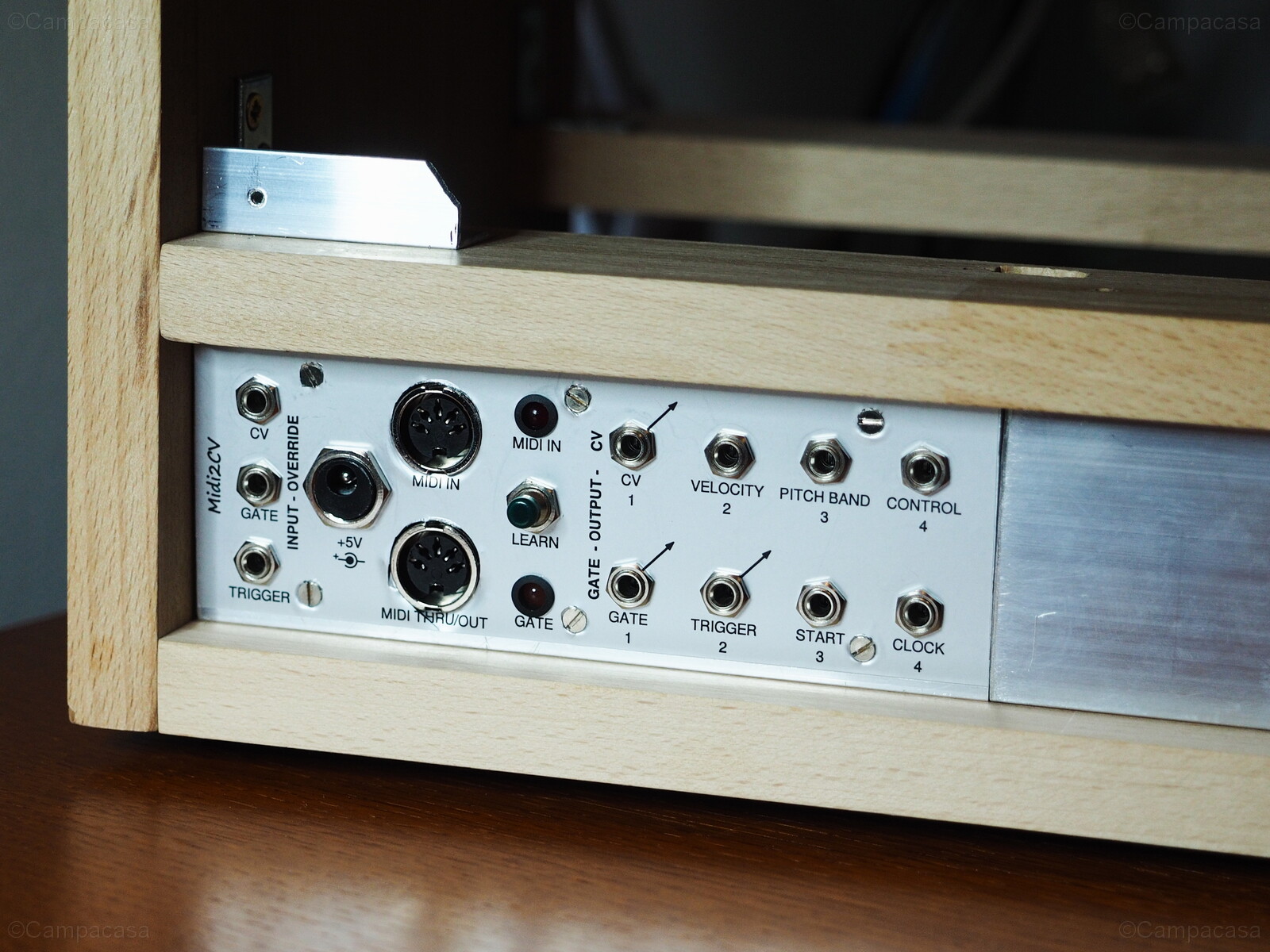 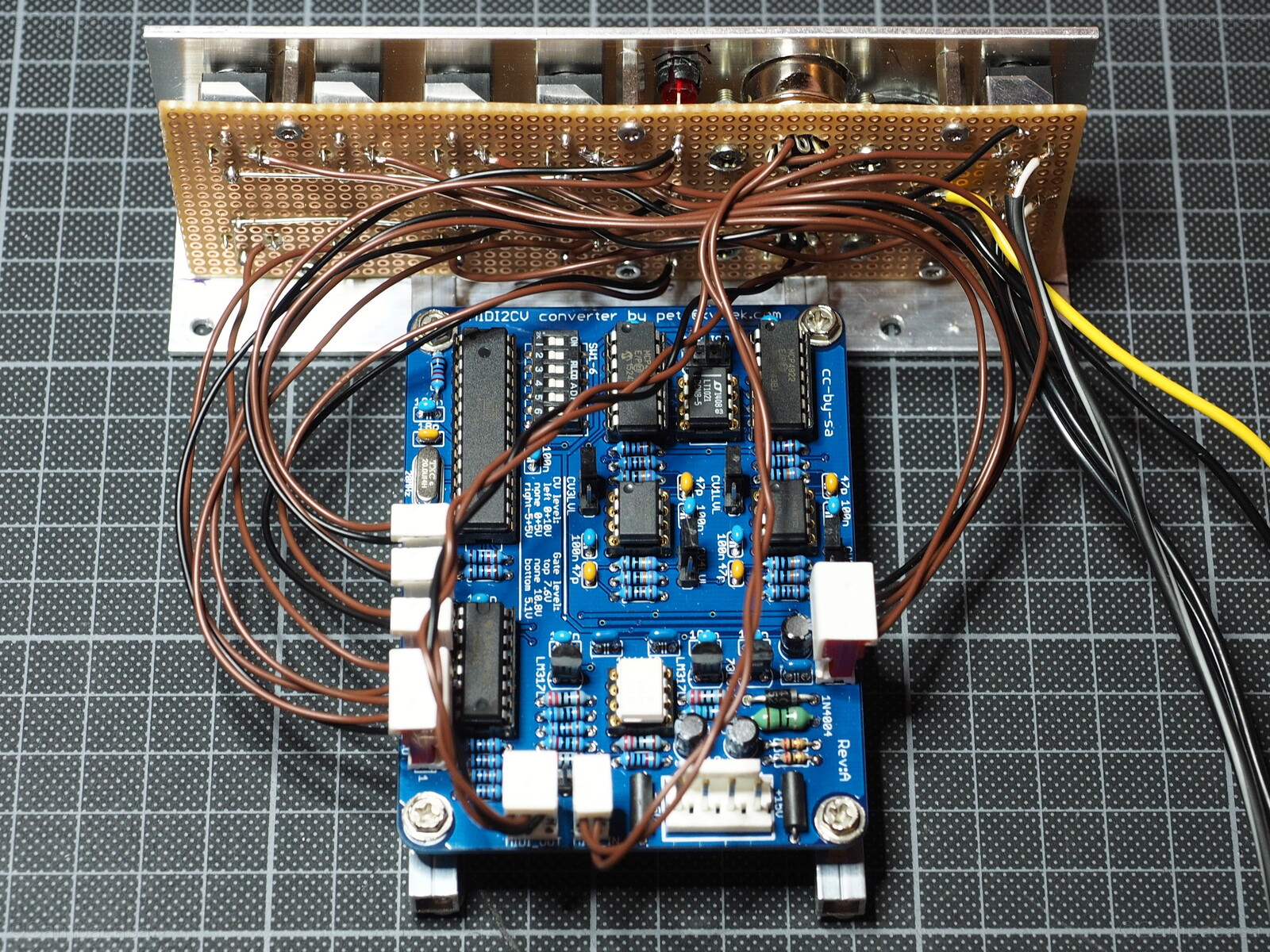 When looking carefully, it can be recognized in the above picture that I have caused a shortcut with the mounting screw in the top-left corner. With that the Midi2CV didn't work after first time mounting into the case. I only noticed when unmounting again. The shortcut was between ground and the resistor connecting to the reset input of the ATMega328p microcontroller. Luckily, so no damage caused. Using a smaller screw helped. 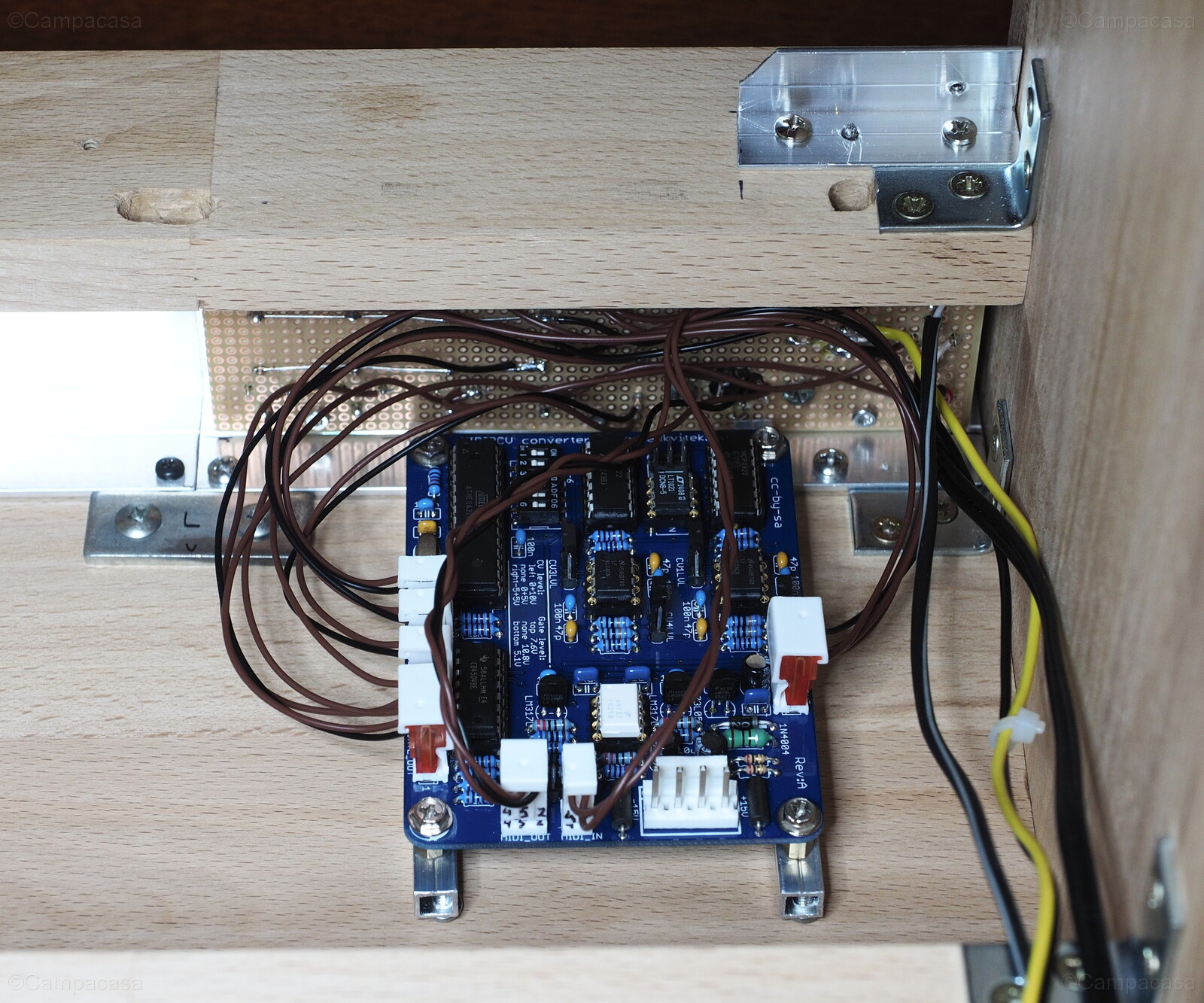 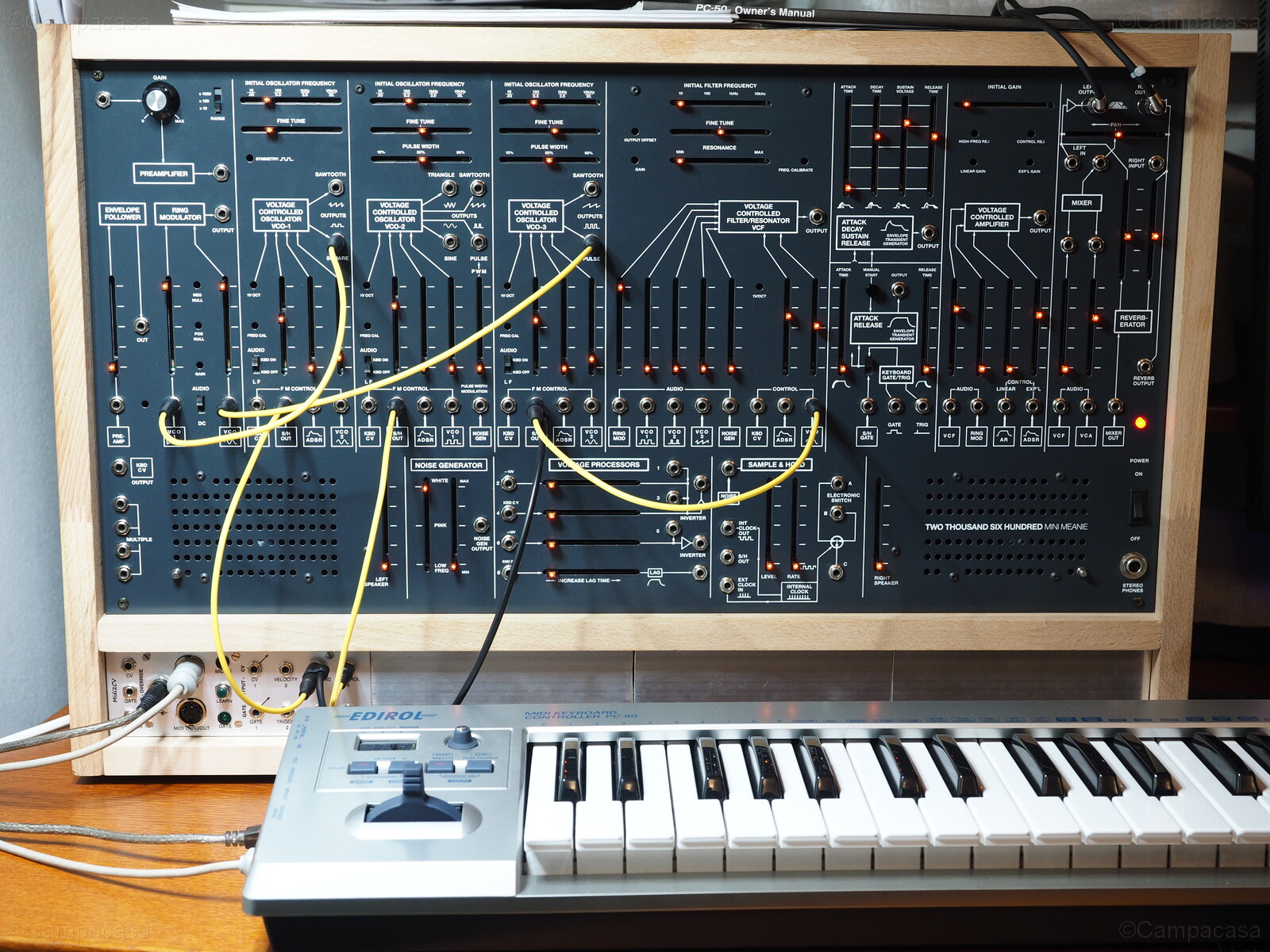